On the occasion of our second birthday

Or, “it may be a transparent path, but dang, there were some big rocks along the way.”

It’s our birthday! That fact makes me want to jump up and down, yelling “we’re two! We’re two!” And turning two is a good occasion to stop and take a look — a transparent one — at how far we’ve come, despite the odds.

When we started the business, I had fallen in love with the promise of blockchain. What a time it was, those heady days of early enterprise blockchain! So much opportunity! What couldn’t we solve with blockchain?

It seemed all you needed to launch a shiny new blockchain offer was to show up at a conference and sound like an expert. Money seemed to materialize out of thin air. People were going into conferences with an idea on a napkin and walking out with investments of $20M+. it seemed everyone was applying blockchain to some new use case, launching a new token, or claiming to be tracking stuff “on the blockchain” (as if there was only one).

Digital empires rose in an instant. ICOs generated millions. Blockchain-focused venture capital firms launched to great fanfare. And I got asked to speak all over the world. 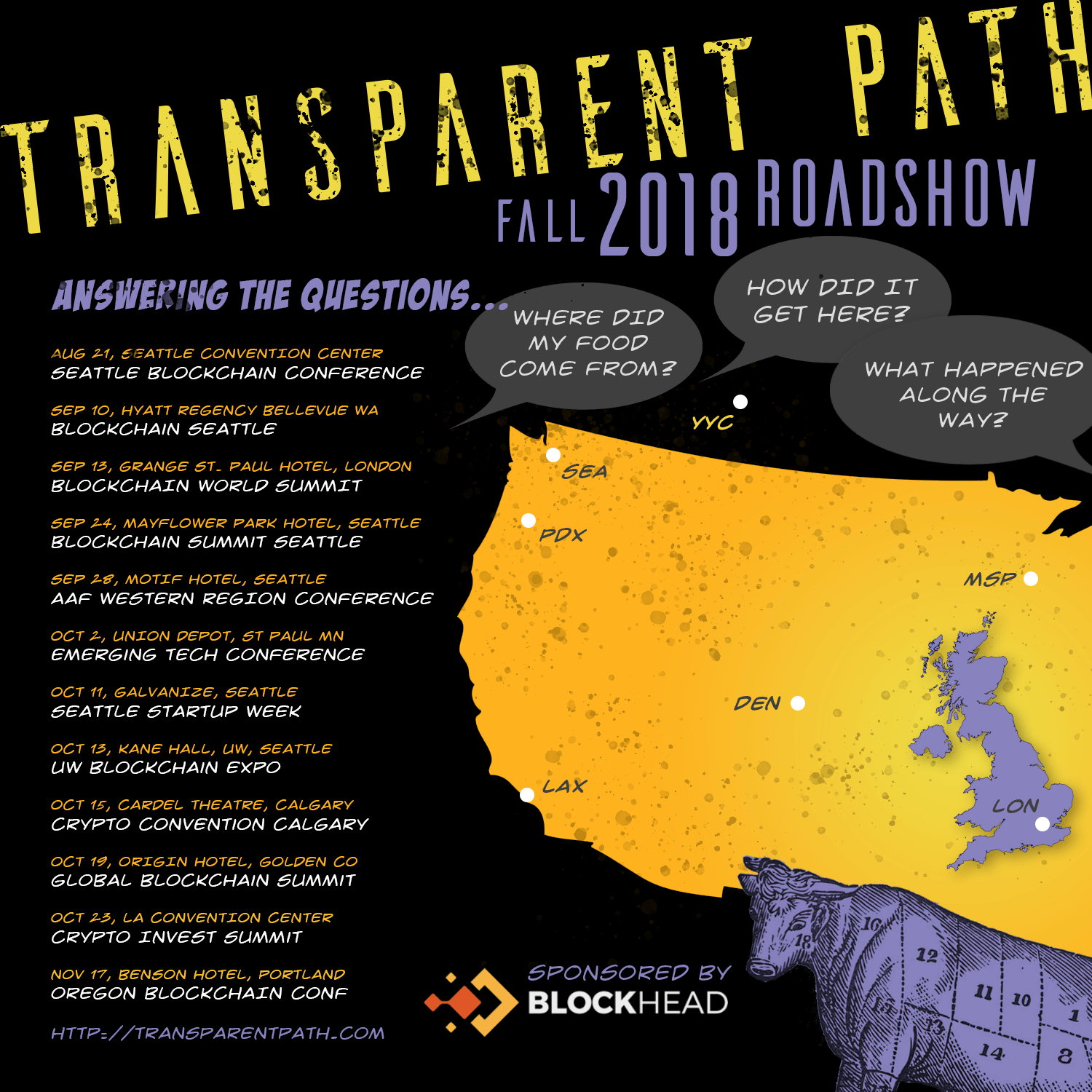 London! Los Angeles! Denver! Calgary! It’s the Transparent Path Fall 2018 Roadshow — a sign of the global interest in blockchain during 2017-2018.

But all hype finally faces reality, and in early 2019, the “Crypto Winter” struck the industry. People were sick of hearing about blockchain. Scams were being uncovered. Many enterprise tech leaders struggled to understand the difference between blockchain and crypto – and had zero interest in spending the time to really understand that difference. Worse, there was no hockey stick return for investors.

I had launched my first big enterprise venture in 2000, and twenty years later, this new cash-infused community was making the exact same mistakes we saw during the dot-com bubble: questionable investments, egregious splurges, and really sketchy deals. When Bitcoin crashed in January 2019, the capital for new ventures dried up within weeks. VCs went belly up, and suddenly, if you were a blockchain startup, life became very very difficult.

Investor anger was everywhere. To see what people really thought of your venture, all you had to do was to look at your Telegram channel. Investors, developers and trolls poured out their rage upon hapless CEOs or social community managers, many of whom posted less and less frequently and finally abandoned their Telegram channels. As they retreated, the chorus of “when testnet?” and “when moon?!?” (aka, when will our token price reach the moon) grew to shouting level.

At the time, we had been a part of WeWork Labs’ blockchain center in Seattle. When we moved in in late 2018, there were perhaps 10-12 blockchain startups on the 14th floor. Nearly all of them had closed their doors by March 2019. Much of that collapse was due to the closing of two big Seattle blockchain venture firms that were funding these startups, both of whom withheld tranches and then went belly up.

Let’s be transparent: this effort has had its challenges

As a huge believer in the technology, I kept the Transparent Path candle burning, rolling out our first pilot program in April 2019 with dev partner Penta Global. And, the tech worked. Our IoT sensors tracked apples from packhouse to retailer, recording location, temperature and humidity into a decentralized ledger. Concept proven! Yet meeting after meeting with investors and accelerators resulted in rejection after rejection. VC leaders told me “don’t talk about blockchain, it’s a non-starter!” “Also, don’t talk about traceability. Everyone’s doing it.”

It was a bleak time. I’d exhausted our savings in building the Transparent Path concept. Far worse, my previous, very stressful job had created several significant health issues that knocked me on my butt for months.

My wife was ready for me to pull the plug. Some folks told me I should just stop. The pressures and the circumstances pushed me to my knees, forcing me to pause and consider shuttering the business.

Any smart person would have thrown in the towel.

Real friends to the rescue

But just before I gave up, something magical and reaffirming happened. A few very supportive friends told me to keep going, that they believed in me and believed in the mission. They soon became my business partners, bringing a desperately needed infusion of new energy and ideas.

We all agreed that our original mission — to reduce food loss and financial risk — was the right one. But the space we’d been a part of — “blockchain for food” — was more of a tool looking for a job. It’s a huge idea and plays into our story quite well. But the infrastructure required added a level of complexity that we just didn’t need right now. Beyond blockchain, you need industrial IoT to capture clean data for a ledger, and once you have that data, artificial intelligence presents a huge opportunity in terms of predictive intelligence and prescriptive guidance. Blockchain on its own? Meh.

The discussion also turned to traceability. We decided that while it’s a key feature, traceability is only one of several features needed.

Finally, we decided to shift focus to support small- to mid-sized businesses who were struggling in this economy, ones who were underserved by the SAPs and IBMs of the world — we would help level the playing field for them.

The new path pays off

For the next six months, we began planning what the new Transparent Path would look like, while I adjusted my diet and lifestyle to get healthy. By the beginning of 2020, my numbers were all in the green and we had onboarded a rockstar team with a larger mission.

So many great things began to happen. We took a look at the offers out there and found problems that were overlooked. We designed a robust architecture supported by a variety of advanced technologies. Transparent Path got accepted into the 5G Open Innovation Lab in April, and by June, Intel and T-Mobile had become partners.

And then the pandemic hit.

This isn’t just some software play to us

I’m sharing all of this with you because this venture is far more of a big deal to the team and I than a simple software play. Transparent Path is more important to us than just spinning up a token or scratching some niche itch. We’re here to do something meaningful — to help fix the imbalances we see in society, in trade and in technology, around food. We know farmers are hurting. We understand how concerned many small- to mid-sized businesses are about their financial futures — facing the same demons I was.

We’re still here, two years on, to bring trust, transparency and collaboration to the supply chain for food. We have a very specific vision of what a collaborative supply chain can look like — and we know it can be done. It’s going to take more than naysayers, a bad economy or even a global pandemic to shut us down.

If you’re reading this, I’m hoping you’re as interested in working on this problem as we are. And that you’ll join us on this mission.